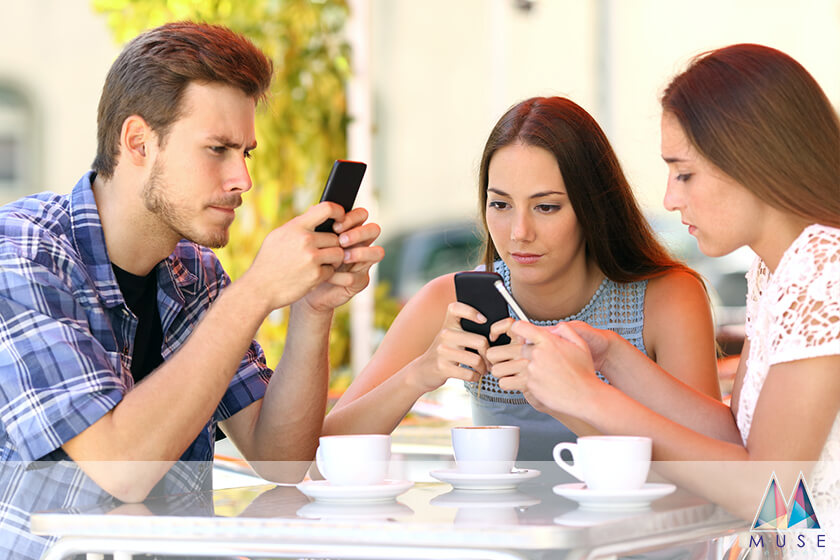 It’s common to throw around the notion that modern generations are addicted to social media. It’s a phrase often used rhetorically, but as new studies come out, we must ask ourselves the hard question: Is social media addictive?

Social media addiction is a problem for 6% to 11% of internet users in the United States. As 69% of Americans use social media in 2018, that number is tremendous.

The dictionary defines addiction as the compulsive need for and use of a habit-forming substance. Clearly, you can see how social media and other internet usages could be habit-forming.

A recent survey found that a quarter of Americans are online “almost constantly.” And social-media use is going up relentlessly worldwide. in 2017, the average American was on social media for 135 minutes a day. Teenagers on average, check their social media accounts 100 times a day.

But does social media merit the term addiction? Is it akin to a drug or alcohol addiction? Does it have the same effects as other addictions?

Read on to find out.

Internet addiction (including social media addiction) has not yet been given the status of a formal psychiatric diagnosis.

There are debates over whether an addiction to social media is actually a disorder or just a side effect of another disorder, such as clinical depression, attention deficit hyperactivity disorder (ADHD), or bipolar disorder.

Both sides have data that supports their argument and even without a formal diagnosis, behavioral health experts agree that compulsive social media abuse can lead to a true disorder.

Experts have noted a connection between higher social media use and depression and anxiety, especially in teenagers.

The teenage years are full of intense feelings, hormones and rapid physical, emotional and psychological change. It can be an extremely difficult time for a lot of youth. Many youths turn to coping mechanisms that may lead to serious issues.

Like any addiction, a social media addict will see other areas of his or her life begin to decline. People who spend the majority of their time online instead of in face to face interactions might increase a feeling of isolation which can lead to depression.

Studies have found find similarities between social-media use and addictive behavior. For example, recent experiments found that being deprived of their smartphone led to anxiety in teenagers. This result has parallels to drug withdrawal.

To answer the question is social media addictive, we need to look at the criteria that describe an addiction and compare it to social media usage.

Here are some symptoms that exhibit behavior that aligns with addiction criteria:

Some of these criteria include:

These criteria all fit with the clinical definition of addiction.

A person does not need to exhibit all these signs in order to have an addiction. This list just shows social media addiction symptoms.

If you see yourself in some of these addiction signs, you are not alone and you can break your obsession.

If you or someone you know needs professional help, consider looking into addiction rehab.

Figure out your Why

First, figure out why you’re addicted to social media. Sometimes people open up a social media app out of boredom or because they are feeling overwhelmed or stressed out.

Once you can pinpoint why you are turning to that social media platform, you will understand what triggers you to reach for that outlet.

Don’t Make it so Easy

Next, you need to give yourself some tough love and make it more difficult for you to mindlessly satisfy the social media craving.

For example, you might delete social media apps from your device or set your phone to Do Not Disturb during times when you want to focus on real life. You should also turn off notification alerts. These pings pull you into the social media universe when you are going about your day, don’t be a slave to your device.

Now you need to actively replace the addiction with something new.

Whatever was triggering you to constantly check social media will still be part of life. So next time you feel bored or stressed you need a productive and positive response ready. You do not want to replace one negative habit with another one, so carefully consider what your new outlet will be.

For example, if you realize that your social media usage is triggered by boredom at work, you could plan to take a walk around the block whenever you feel bored.

If leaving your desk is not an option, you could do a short mindfulness routine or breathing exercise.

Or, you could begin journaling about your feelings in a notebook. (Avoid going on your phone at all with these new positive responses.)

As you work to rewire your brain with new ways to deal with triggers, your need for social media will decrease.

Remember, forming a new habit takes time and especially consistency. Set yourself micro goals and reward yourself when you meet them.

Let’s say you work for an hour without social media, then give yourself a 10-minute reward break. After each successful day, indulge in an hour of pampering that evening. Maybe run a bath and enjoy a good book.

You will be so glad once you’ve broken the chains of social media addiction and will be able to be more productive, more engaged in the people around you and more free to do what you want.

Though social media addiction is not yet a clinical diagnosis, it can ruin family relationships and productivity in teenagers and adults.

Remember, millions of dollars have been invested in making social media platforms engaging so that people spend a lot of time on them. They want you to spend all your time on their channel.

But that doesn’t mean you have to be a slave to social media. It is important to set healthy boundaries and break negative habits. When you do this, you will be able to live your life more fully and joyfully.

If someone you love is exhibiting signs of addiction, read how to truly help an addict for some great tips.