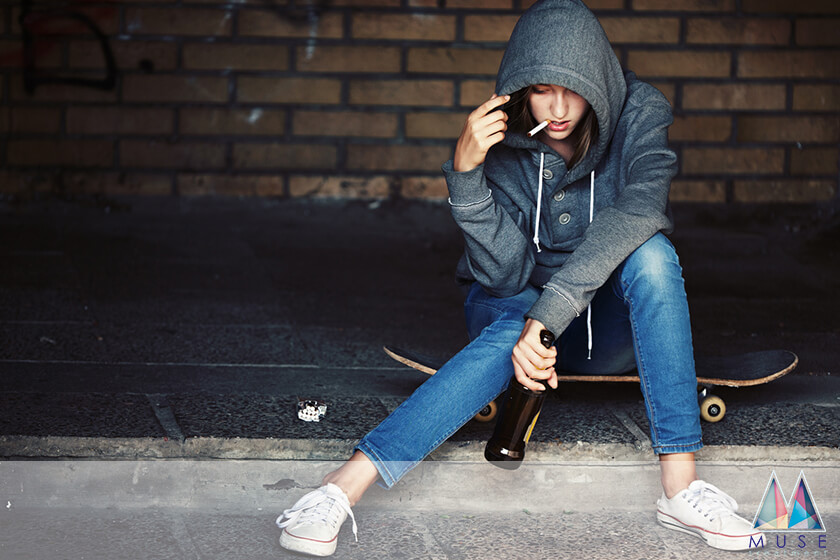 Addiction is a strange beast, and dealing with it can be a very hard and painful process for those affected by a loved one’s substance abuse.

Alcohol abuse, like all types of addiction, is a complicated matter at any age. But things can be especially confusing if the situation involves teenage alcoholism.

Often, there is confusion on a parent’s part; it may be difficult to determine the line between teenage rebellion and a true case of alcoholism. Many parents are dismayed to find that their teenager is drinking alcohol despite the existing laws and despite their better guidance.

However, teenage alcoholism is another matter entirely. Parents should know what it is they’re dealing with so that they can seek the appropriate help and know the next steps to take for their child.

Below, we’ve put together five signs of teenage alcoholism that parents sometimes miss. It’s important to be aware. These are red flags that should lead parents and other loved ones to seek advice, treatment, or counseling from qualified professionals in order to determine the best course of action.

One of the most obvious signs of teenage alcoholism is a truly excessive amount of alcohol consumed. Many teenagers party and drink with their friends — and while this is an unfortunate truth, it does not necessarily constitute alcoholism.

Another sure sign of alcoholism is drinking more than one intends to. Enjoying things in moderation is one thing, but if a person is unable to control how much alcohol they consume or often gets carried away and breaks their own rules, they may be struggling with alcoholism. Using alcohol despite personal consequences (and disappointment in one’s self) is a sign that one is powerless against the drug and needs to seek help.

Teenage alcoholism may be spotted in many different forms. Alcohol abuse will affect a teen’s behavior in negative ways, including major changes in academic performance, a loss of interest in activities and hobbies the teen used to enjoy, run-ins with the law, and more.

Alcohol abuse will also affect a teen’s social life. Changes in friend groups, marked changes in behavior, a decrease in personal hygiene, and more interpersonal struggles than ever before can all be signs of teenage alcoholism.

A teen struggling with alcohol addiction may also harm friendships and relationships by a sudden desperate need for money. He or she may resort to borrowing from anyone willing to lend it. This is to keep up with the amount of alcohol being consumed by the addicted person. Secrecy, lying, and withdrawal may all come into play, too.

This is to keep up with the amount of alcohol being consumed by the addicted person. Secrecy, lying, and withdrawal may all come into play, too.

Not all consequences of alcohol abuse are interpersonal. Teenage alcoholism can also be spotted by the physical changes it makes in an addicted teen.

Glazed or bloodshot eyes can be a sign of alcohol abuse. Other signs include the smell of alcohol on the breath or clothes, slurred speech, and a notable deterioration in physical appearance.

Of course, drinking in excess often leads to vomiting. If a person is found passed out in their own vomit after a bout of binge drinking — or if they reek of vomit due to some sort of situation like this — it’s a high chance that alcoholism is a viable explanation for this behavior.

Teens struggling with alcohol abuse may also experience unfortunate changes in their sleep patterns which can lead to many other issues. Coordination problems, double vision, and other negative health consequences could all be taken as signs of teenage alcoholism.

Alcohol abuse will also affect a teen’s cognitive functioning. Often, since the teen is likely enrolled in school, these mental changes are displayed in their school work or in their behavior in classes.

Someone struggling with teenage alcoholism may have difficulty concentrating and thus often have a hard time paying attention in class. In addition, alcohol abuse may lead to short-term deficits in memory and cognitive functioning. All of these factors can lead to significant changes in a teen’s school performance and social life, as previously discussed.

Substance abuse in teens may be difficult to address, but there is help available.

Though certainly not all mood and mental disorders are linked to alcohol abuse, another unfortunate consequence of teenage alcoholism is the effect it may have on the teen’s mood and emotions.

A teen’s battle with substance abuse may lead to struggles with anxiety, depression, mood swings, and more. Often, excessive alcohol intake is linked to some sort of desire to numb one’s emotions or to escape whatever unpleasant reality they find themselves in. If a teen is struggling with these emotional and mental issues in an abnormal way, teenage alcoholism may be a factor.

What Can I Do?

If you suspect that you or a loved one is struggling with teenage alcoholism, contact us today. Overcoming addiction may be a long and winding road, but anyone dealing with a loved one’s illness should hold fast to the hope that recovery is possible.

Do not ignore the warning signs of teenage alcohol abuse. Enabling an addict’s struggle by ignoring or downplaying it does not help anyone. The most loving thing to do is to seek help for a person in the throes of addiction. Treatment options like rehab, detoxes, and more are available to assist in the recovery process.

On the long road of recovery, you should also keep in mind that relapse is not the end — though steps should be taken to prevent it at all costs.